David is an advocate for his clients. Whether guiding a grieving family through wrongful death litigation, forcing an insurance company to fully compensate an injured client, or negotiating reductions of metal debts with providers, David is willing to work around the clock. .  David is a very experienced trial lawyer that prepares every case like it will go to trial.  He works tirelessly and effectively on behalf of his clients, and the results are obvious.   Whether it is a motor vehicle accident/wrongful death case, major medical malpractice issue, dog bite or slip and fall injury, give him a call.

In 2018 and 2019, David was named as one of the top 10 trial lawyers in the country.  In 2010, 2011 and 2012, David was named one of the top 25 lawyers in the State of Oregon under the age of 40.  Also in 2011, David was asked to be an instructor at the National Advocacy Center on the topic of jury selection after receiving the top grade in a week long training of prosecutors from around the country.  He was named a Rising Star as one of top personal injury lawyers in the State of Oregon.  David speaks annually as a guest lecturer at the University of Oregon and Lewis & Clark law schools on the topics of cross-examination and trial practice.

Before joining Thuemmel, Uhle & Eder, David was an assistant City attorney with the City of Beaverton. David’s prosecution experience included handling thousands of vehicle related cases including D.U.I.I. cases, traffic crimes/violations as well as civil litigation and major crimes work. David’s knowledge of the vehicle code and litigation experience has been useful in criminal and civil cases.  David has achieved massive verdicts and settlements on personal injury cases as well as tried personal injury cases for other personal injury lawyers.  He has tried over 100 jury trials and has substantial experience in arbitration, mediation and negotiating a great settlement.  David is passionate and dedicated to the providing great legal representation to those in need.

David was the chair of the Oregon New Lawyers Division in 2013. In 2010, he developed a program to help underemployed and unemployed lawyers receive training from nonprofit organizations. This program helped numerous lawyers earn jobs and the American Bar Association named it the Young Lawyer Section Program of the Year as the best program in the country. 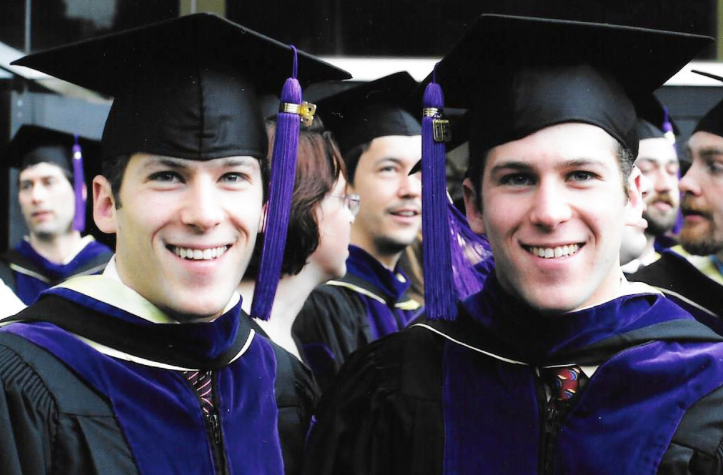 Ben (left) and David (right) Eder are identical twins. In his free time, David enjoys cooking, running and spending time with his wife and two children.